Ballads Of The Research Department 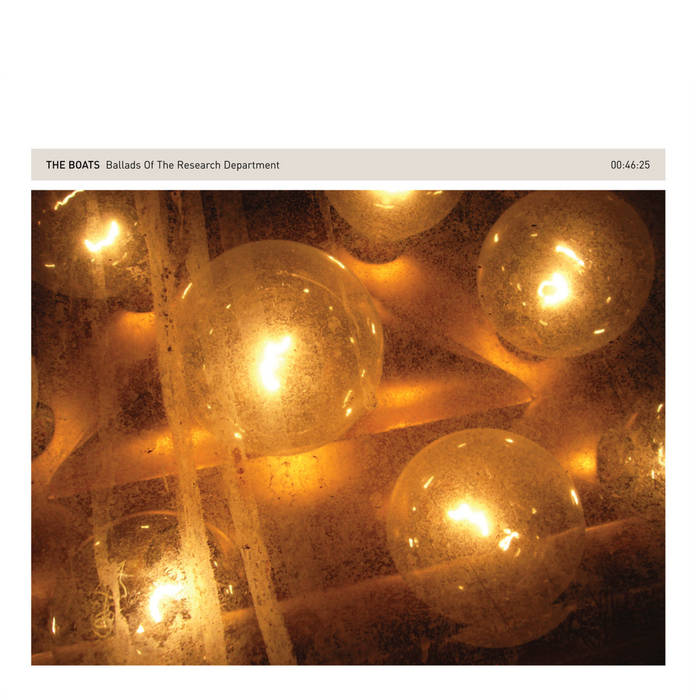 Charlie Onions Not what I expected. Leans more on the post-rock side than the ambient. Wonderful musicianship throughout and the strings, which are hard to pull off these days, are impeccable. Gorgeous, humbling record.

quietplease This thing is an amazing mix of ambience, warm fuzz, random sounds, an occasional beat (never very committed), and even some singing. Don't let the freebie track fool you -- the yolatengo/lua/prekop feel cuts out after 5 minutes along with the beat, and you get to drift aimlessly from there.

The Boats are a duo consisting of Craig Tattersall (ex-Hood, The Remote Viewer, and owner of the Cotton Goods label) and Andrew Hargreaves (Tape Loop Orchestra) as well a rotating roster of guest musicians and vocalists. While Ballads of the Research Department is their 12k debut, it follows up a string of critically acclaimed and genre favorites such as Sleepy Insect Music (Flau/Home Normal, 2010), Words Are Something (Home Normal, 2009), and limited editions released on their own Our Small Ideas imprint. With The Boats, 12k, who continues to move away from the “electronic” tag, further plays the line between experimental electro-acoustic sounds and structured music creating an intoxicating hybrid of instrumentation, vocals, electronics, piano and drums.

With Ballads of The Research Department The Boats explore a duality created by the traditional “ballad” and the modern notion of science and research. In their words:

“We wanted to present the ballad in a new form employing sounds as well as words to tell our stories. These stories are not as lyrical as the ballad form of the past and are open to the listener’s interpretation. These are ballads of our time that are aware of the past. They are investigations into the uncertainty of our time, love, woe and hope.”

They work in these grey areas by combining elements of various musical styles — ambient, pop, classical, experimental — creating overlaps, gaps and layers, nudging the boundaries in the most sincere and natural of ways. The Boats’ music is warm, rich and complex but never over-complicated. They rarely rely on any sort of studio trickery instead opting to use the most honest tools to get the sounds they want — be it proper recordings of acoustic instruments or recording to analogue tape. This doesn’t, however, override a passion for experimentation as they are happy to throw away the rules in favor of the aesthetics of error.

On Ballads... The Boats are joined by long-time collaborator Danny Norbury who supplies cello throughout the four extended songs on the album. From Flau Records, Japanese vocalist Cuushe drapes her soft voice over the gentle “The Ballad of Indecision” accompanying its warmly pulsed beat, hazy textures, strings and synthetic blinking. On “The Ballad of Failure” (featured on 12k’s latest Sampler CD), perhaps the album’s most structured and stand-out piece, Chris Stewart’s voice alongside the acoustic drums and harmonies flirt with a mixture of shoegaze and ambient music, encapsulating the album’s enveloping and dreamy atmosphere perfectly.