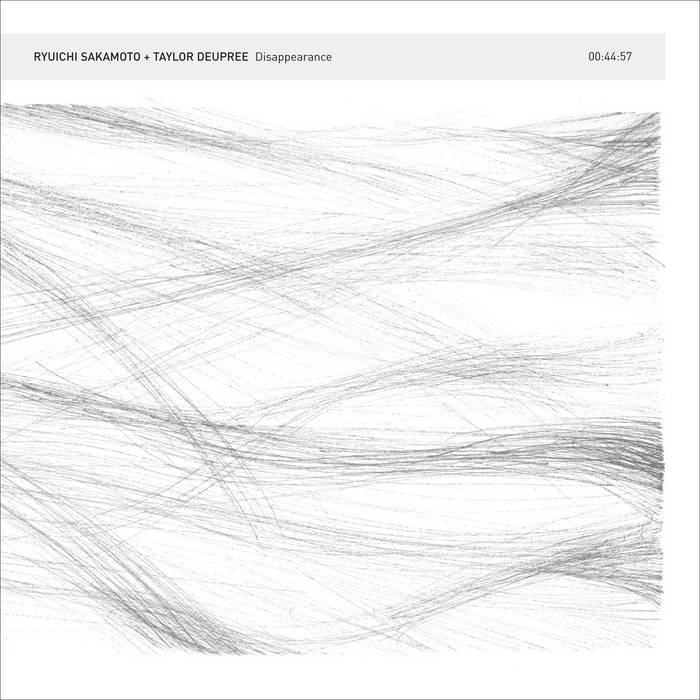 no audible difference between flac and mp3 :^)

Isolation, solitude, contemplation. These are the themes that discreetly weave their way through Disappearance, the first collaboration album between 12k’s Taylor Deupree and pioneering electronic composer and pianist Ryuichi Sakamoto. The two began their musical dialogue in 2006 when Deupree was invited to remix a song from Sakamoto’s album Chasm. “World Citizen” was the song and it sparked continued collaboration as Deupree contributed to two of Sakamoto’s activist projects: Chain Music and KizunaWorld (as a trio with Sakamoto and Stephen Vitiello.) With the convenience of both artists living in New York they kept in touch, released music on 12k (Willits + Sakamoto’s Ocean Fire) and, in April of 2012, performed live together at John Zorn’s club The Stone. It was this concert that planted the seeds for Disappearance.

The initial tracks for Disappearance were recorded at Sakamoto’s studio in New York City during rehersals for the April concert. The two immediately entered the same sonic mindframe that lead to hours of concentrated, hushed music. Sakamoto’s piano playing, both traditional and prepared, emerged as perhaps some of his most beautifully sparse in recent years, letting the sound of the room and shuffle of chairs take an active roll in the recording. Only the most minimum of essential notes, accentuated by silences and the scraping of the piano’s strings, plays alongside Deupree’s nuanced passages, created with analogue synthesizers, strings, and found objects. These warm, human tones became the means of communication between the two artists who effortlessly created a musical language.

The five tracks that make up Disappearance are delicate and composed, however, they’re not all peacefulness and placidity. Micro-tuned edges, bursts of noise, percussive prepared piano and the warble of old reel-to-reel tape keep the mood grounded and warm, turning it inward and asking the listener to reflect on their path. “Curl To Me,” the album’s final piece, is highlighted by the sounds of Ichiko Aoba, a major up-and-coming singer/songwriter from Tokyo. Both Sakamoto and Deupree have recently worked with Aoba in Japan and wanted her presence felt on the album. Emphasizing the solitude and stillness of the recordings, Aoba provided both her voice and the almost disturbingly intimate sound of her own heartbeat.

Disappearance is a soundtrack for holding breaths. Sakamoto and Deupree lay down worn roads, but don’t leave signs, for a journey woven together by the quiet celebration of the fragility of nature and life.