Not A Leaf Remains As It Was 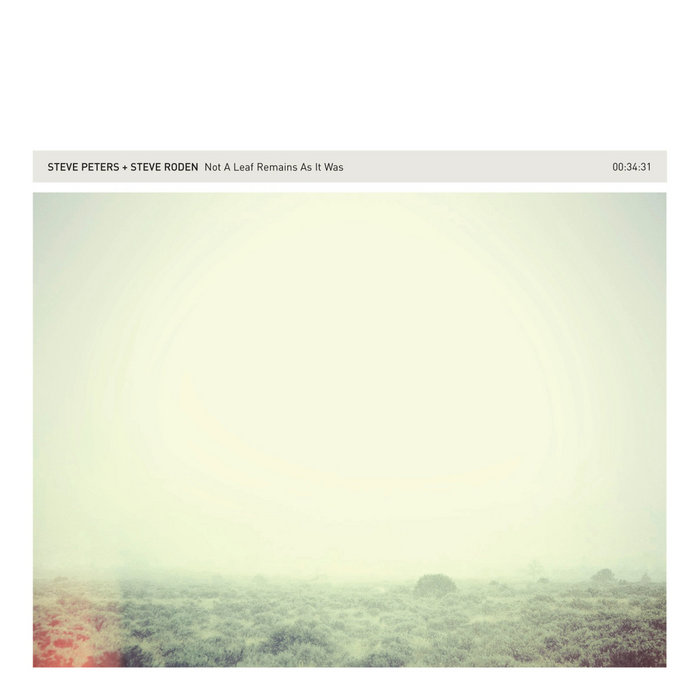 Focus on the Breath

In 1995 Steve Peters and Steve Roden toured as a trio with singer Anna Homler; sometimes they would vocalize behind her, and they liked the way their voices blended together. They then spent about 15 years saying that “someday” they should record a voice-based project together. Aside from the physical distance between them, the problem was always: What would we sing? Neither wanted to write or sing lyrics.

Inspiration came in the form of a book of Japanese jisei – poems allegedly written by monks on their death bed – printed in both English translation and Romanized Japanese. Phonetically pronouncing the Japanese reminded Peters of the technique Roden has used of systematically chopping up the syllables in English texts to transform them into sound poems. Since neither of them speaks Japanese, it seemed like a good place to begin.

The two of them applied for a residency at Jack Straw, a non-profit recording facility in Seattle that gives grants of studio time. They had no exact plans other than they intended to avoid electronic instruments, or directly referencing the poems’ literal meaning, or imitating any Japanese musical idioms or “Zen” stereotypes. Culling some of the poems that made references to sound and noting them on 3x5 cards, Peters and Roden sorted the cards into four groups according to the seasons of the year that the poems represented, divided the cards between them, and taped them to their music stands. They then sang random fragments from the various cards - a word here, a line there, maybe backwards, maybe the English translation. They made no effort to keep the poems intact or retain any of their meaning, instead treating the material simply as phonemes to put in their mouths.

All of the music was improvised in the studio, built up one track at a time. They worked intuitively, with no structural guidelines beyond using the texts. Three days later they emerged from the studio, not quite sure what they had done. After letting the material rest for several months Peters and Roden determined that Doug Haire, who recorded the sessions at Jack Straw, was the obvious choice to do the mixing. The album was completed in the fall of 2011.

12k is known to be a label of understatement and restraint, however, Not A Leaf Remains As It Was is arguably the most hushed and delicate record in the label’s catalog. Every sound on the album’s four tracks, be it the artists’ voices, a pump organ or melodica hangs by a thread, played ever so slightly, with utmost care. Noises, created from turtle shells, leaves, and bells shuffle and flutter, as if they are quietly alive, in the background providing a textural backdrop to the sublime tones and ghostly voices.