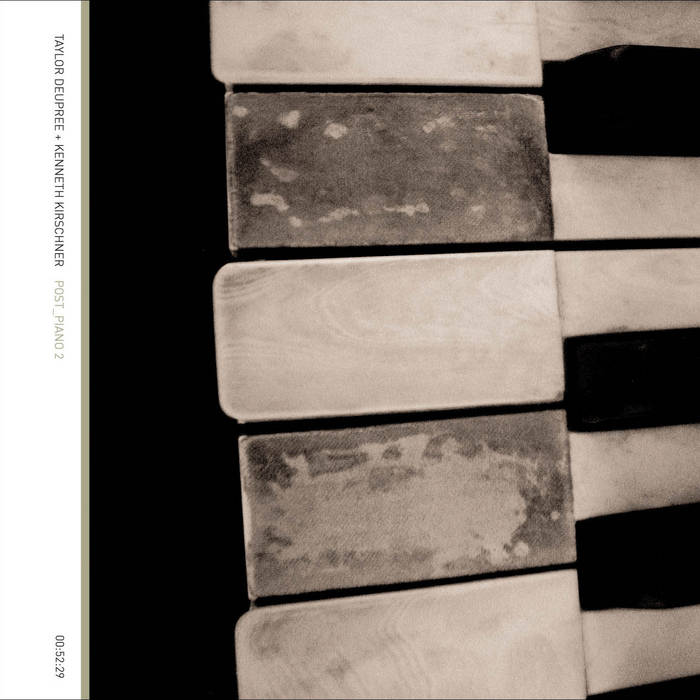 Taylor Deupree & Kenneth Kirschner’s Post_Piano 2 continues the two New York composers’ collaborative investigation into the intersections of digital minimalism and experimental piano composition. Working with his childhood acoustic piano and the accidental sounds of an imperfect recording environment, Kirschner first composed a simple, austere “piano sketch” to serve as raw material for the project. This sketch was then passed on to Deupree, who created three new compositions entirely out of sounds derived from Kirschner’s piece. The two then collaborated on editing the new recordings, which transform the original piano sketch into a diverse array of sounds both familiar and unexpected. Like their previous CD, Post_Piano 22 is released as an open source project, and the composers invite other artists to continue the interpretation and transformation of their work in an ongoing process of open collaboration.

Kenneth Kirschner on Post_Piano 2:
“Taylor and I wrote Post_Pianoo in 2002, and since then I had added to my studio an actual acoustic piano – in fact, the very piano on which I first started studying at the age of 5. It’s an old piano, with an old sound, and I knew I wanted to use it for Post_Piano 2. But my studio doesn’t exactly offer a pristine environment for recording acoustic instruments – not least because an elevated train runs by the window every few minutes. My idea, therefore, was to emphasize the environmental sounds of the space, and create a piano piece that was as much a series of field recordings as an actual studio work. The result was “November 11, 2003” – a spare, fragmentary piano sketch recorded using techniques that ranged from the relatively high-tech to the very, very low-tech. This formed the source material for the entire project. And from that point on, the process was similar to our previous CD: the piano sketch was handed off to Taylor, who chopped it up in the computer and built new compositions from the resulting fragments. I encouraged him to focus as much on the accidental sounds – the passing subway, the street noises, the creaking of the old piano’s mechanisms – as on the piano notes themselves. Taylor wrote three long pieces using three distinct approaches, and each transforms the piano sketch into something new while still evoking the character of the original. His tracks have a modern, state-of-the-art sound – yet they never let you forget that what you’re hearing was once a piano. We then collaborated on the editing of these pieces, which make up the first three tracks of the CD. The final track is “November 11, 2003” itself; the CD thus concludes at the project’s beginning, with a coda that reveals the origin of all the sounds that preceded it. And as with the first post_piano, we’re presenting this new CD as an open source project: it’s released under an open license, and we eagerly look forward to hearing how our friends and colleagues take these old sounds and find new uses for them.”